I would have to describe it as one of the craziest weekends ever.

It began with an 8 am start for the Asian worship session of Converge 2012, kicking off an entire day of non-stop worship for the city of Perth with different teams coming in to lead worship at Wesley Church, right in the heart of the city.

It was a wake-up call for the city of Perth, probably because Clement played his drums ultra loud and Darren pumped up his amp. The acoustics of Wesley Church probably amplified everything by a factor of 4. But it’s a sound of praise that needed to be heard in the city.

Even though there was probably only about 40 or so people attending, there was a real sense of the presence of God as we worshipped. The band (consisting of worshippers and musicians from different churches) just flowed together beautifully, like we had played together for years instead of having only had a couple of rehearsals beforehand. It was an inexplicable synergy between the team members, all of whom are friends and worshippers I deeply admire.

I didn’t realise it at the time, but the music was also being pumped out through external speakers. We were filling the streets of the city of Perth with the praises of God!

After an extended time of free worship, we began to pray (as it was Pentecost) for the outpouring of the Holy Spirit on all the different churches represented by the people who were in attendance. Clem started prophesying on the drums, which I interpreted as the sound of breakthrough for our churches – that God would bring fresh anointing, strength, vision and growth.

We ended with the prophetic song “Did You Feel the Mountains Tremble”. I really sensed that spiritual mountains were shaken that morning. I sensed that the darkness over the city was trembling because the saints had joined in one song. The darkness was trembling because all the streams were flowing as one river: the Catholics, Charismatics, Uniting Church, Presbyterians and Anglicans. The brokenness of the church was being washed away.

After that session, quite a number of people came up to me to say that they thought something quite special happened that morning. As Pastor Yoy describes it, heaven and earth had converged.

Clem was especially blessed. It was his birthday and the Lord marked him with favour. You will see in the picture above that as we were praying, the cross at Wesley cast a shadow across his back. What a picture (thanks to Darren!).

After the session, we gathered outside the church to celebrate Clem’s birthday and Wendy Yapp had us wrap the week’s knitting (which was symbolic of the knitting together of prayer) around us and then around the building. The knitting went about half way around the church. Here’s a picture of the band “knit together”: 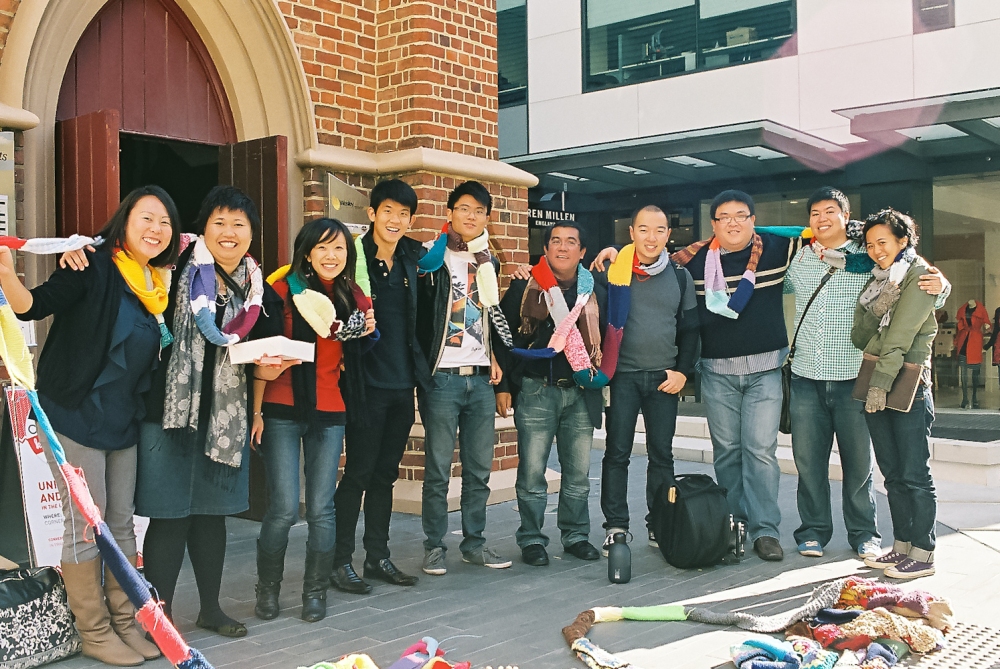 Here are some photos of some of us spreading the knitting around the church: 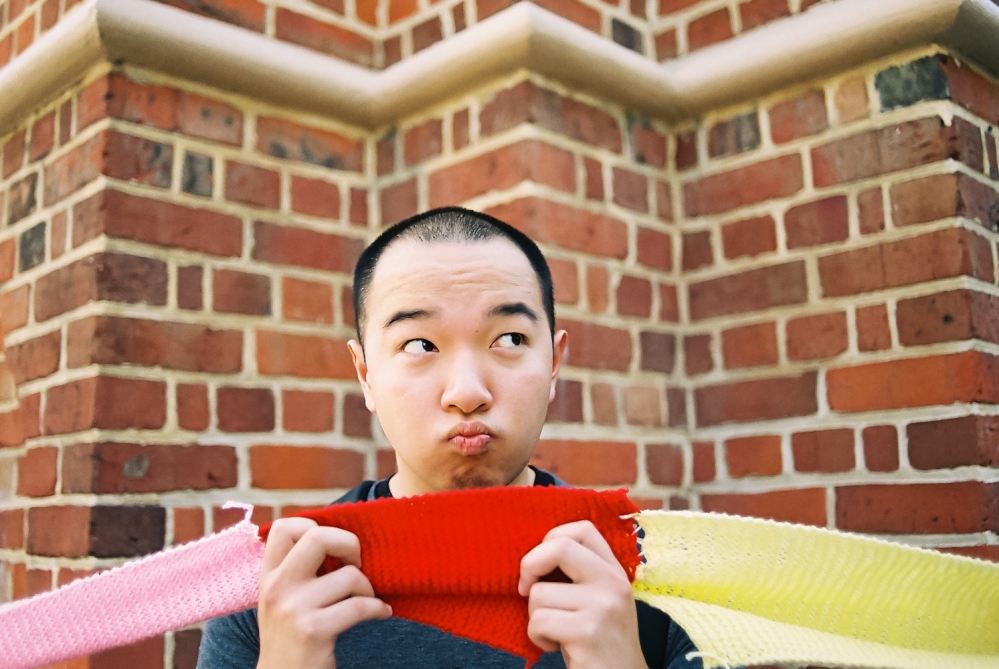 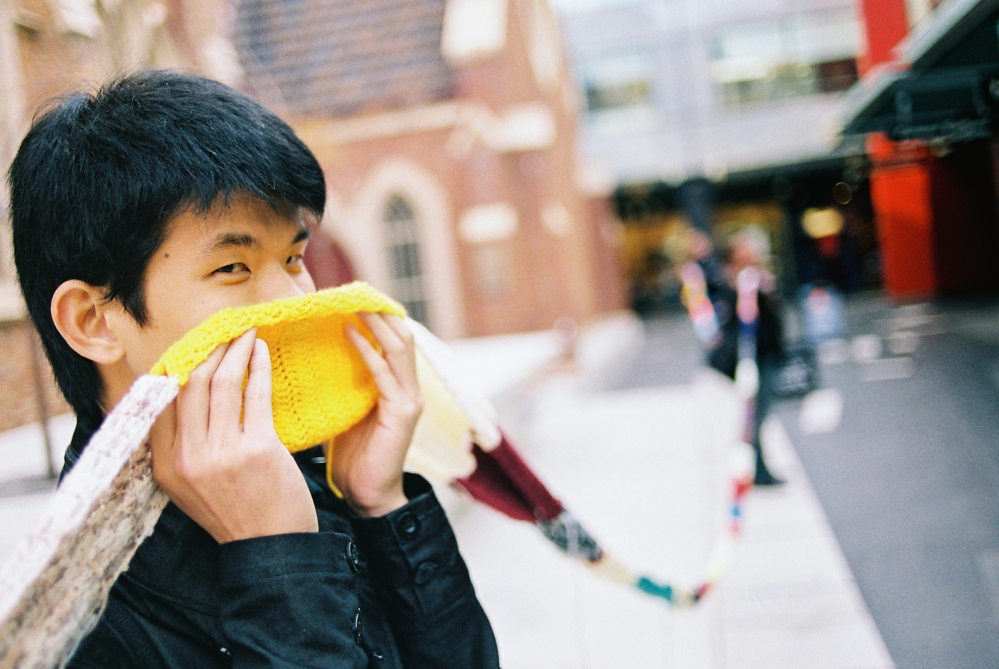 After that, the sound of war cries and congas filled the church as the African team led by Arlene Gregory began to worship. It was vibrant in colour, sound and spirit.

We came back in the evening for the last session of the Day of Worship called “Hear the Nations Worship”. During the session, we wove into our worship elements of Gospel-style (led by Stephanie Truscott), Messianic (led by Kathy Susnjar) and African worship (led by Arlene), declaring the words of Revelation 5 that every tongue, tribe and nation will be represented before the throne of God. We finished the evening singing How Great is Our God in English, Indonesian, Chinese, Tagalog and Zulu.

Here is a picture we took at the end of the evening:

We were told later that tens of people were coming into the church throughout the evening, drawn to the sound of praise!

After that night, I was exhausted.

But the weekend was not over yet. As I was attending the Friday night session of Converge, Patrick Chen of Zion Praise Harvest invited me to lead a worship slot during the Global Day of Prayer (on Pentecost Sunday), which his church was hosting. He was bringing together 35 to 40 different churches and ministries to participate. I was told to pick a song, get to the service half an hour earlier to do a sound check and… that was it. Mentally, I couldn’t picture it.

So I just chose the song “Come Holy Spirit”, a song I love and I thought captured the Pentecost theme.

When I got to the meeting this afternoon, I was given a runsheet that had planned the meeting (incorporating the 35 odd ministries) right down to the minute. Zion’s administration and planning skills are second to none.

But it was amazing how God orchestrated unity even though I came into the picture quite late in the piece. It just so happened that I was given the slot just before the Transformation session, the opening Scripture passage of which was Luke 4 (“the Spirit of the sovereign Lord is upon me”). The song I had chosen (quite in isolation of the planning) fit perfectly. I was amazed at how God brought unity even in the programming!

So it’s been an amazing, action-packed weekend.

When I went to Global Day of Prayer, I was asked “what ministry do you represent?” It seemed that everyone had come representing a church, intercessory ministry, marketplace ministry or some other organisation. I didn’t really know what to say. I couldn’t say I was representing my church because I wasn’t even part of the church worship team.

As we were preparing for Converge, I had said to the different worship teams that we shouldn’t see ourselves as working towards the end of Converge; rather, we should see Converge as a time for the birthing of new destinies. And I think that’s probably where God is leading me. This Converge weekend has been the beginning of something. There is not yet any designation for it. It doesn’t have a cool ministry name, logo or constitution. It is the beginning of worshippers gathering together to lift up the name of Jesus in the city of Perth and for no other name. I can’t wait to see what that will look like.