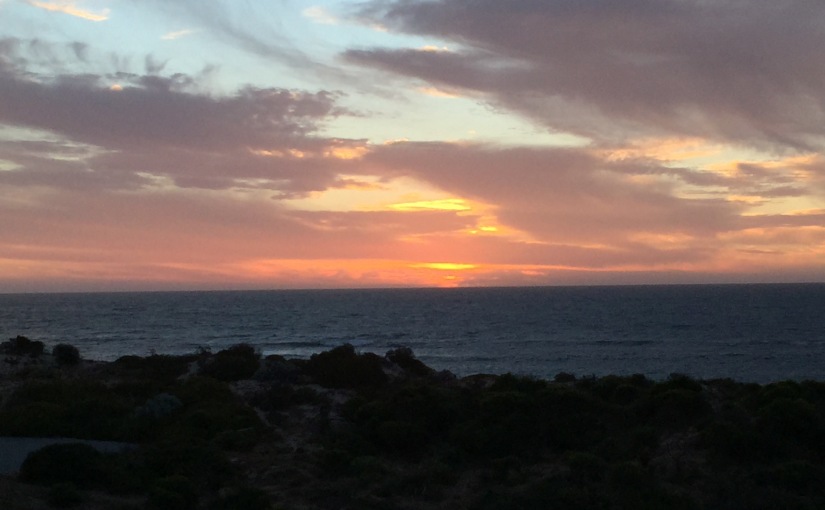 We had the honour of having our first Worship Leadership Team (WLT) Retreat this last Australia Day long weekend.

So, on the evening of Friday, 23 January 2015, FCC’s WLT and our spouses/significant others drove down to a beautiful house backing onto Melros Beach for a weekend  of chilling, eating, planning, eating, relaxing, strategising, crabbing, eating and just hanging out together.

Lucy, our pug, came along for the trip (I did mention that significant others were included). We managed to sneak her into the children’s playground area of HJs using my large frame as a visual shield.

Burgers done, we were off for crabbing.

Senny is our head of sound and logistics, and true to form, we opened the boot of Dave’s car to reveal a fine collection of Senny’s high powered torches.

It was a pretty windy evening, so it was difficult to see too far below the surface of the water. I came out empty-handed and even the most die-hard of our team only managed to nab a few. Which was fine because through some inexplicable perversity, our bucket had mysteriously floated away so we couldn’t contain a large catch anyway.

Lydia, Caleb’s wife, showed her deft touch with the crab net, scooping up every crab that crossed her path, regardless of size or gender.

Dave managed to catch a stingray which itself is no mean feat given that all the stuff we read on the internet suggested that catching stingray was not worth the pain of being stung. 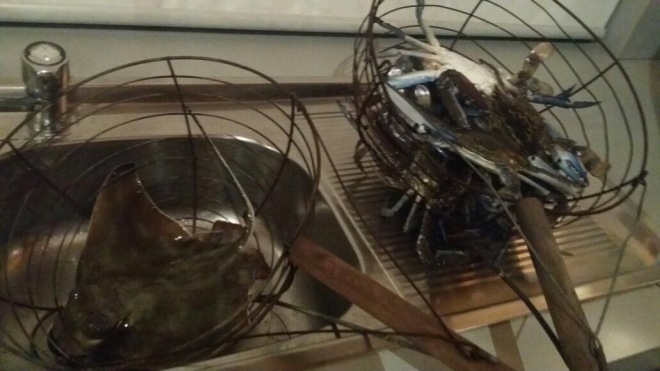 It was then back to the house for our little crabs to get their steam bath before the hungry humans cracked their hard exteriors and consumed their sweet flesh.

The next morning, it was scrambled eggs, bacon, toast and truffle butter for breakfast. Truffle butter makes everything taste good. And Ling introduced us to Speculoos – butter made out of cookies. Which really means butter into cookies made into butter again. Sinful! 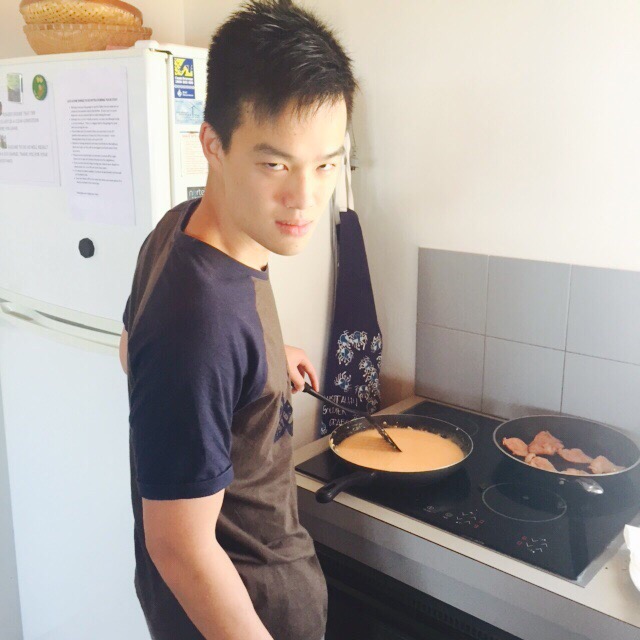 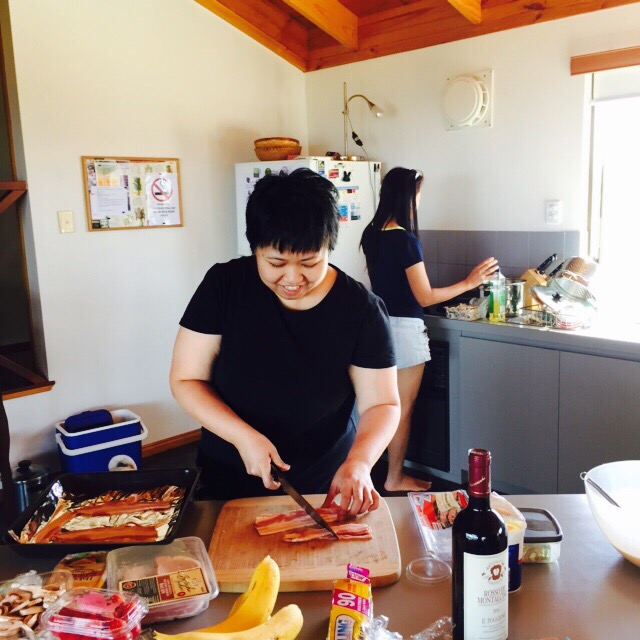 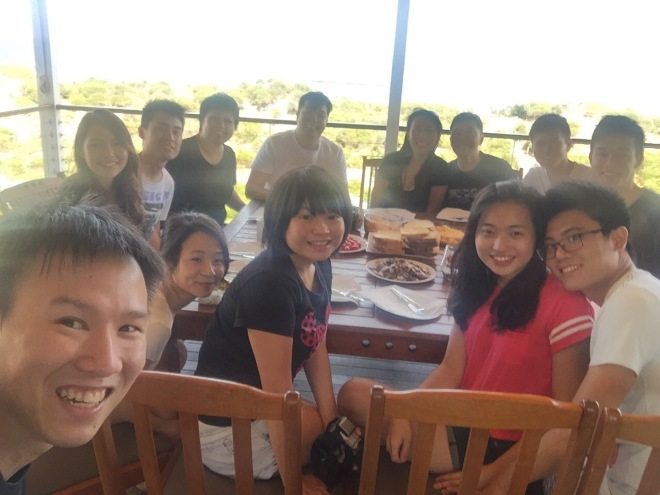 After breakfast, Caleb led us in a great time of worship before we began to strategise for the year. Dave launched a bold new vision for our ministry in 2015. More on this in future posts. Needless to say, we are expecting great growth in our team this coming year.

Whilst we were attending to the nitty-gritties of the retreat, the girls were out in Mandurah town getting massages, pedicures and painted toe nails. Senny and I joined them – for lunch after! Some excellent fish and chips at Sharkeys and ice-cream at Simmos later; and then we were back at the house. By this time, Vinny and Mandy had arrived. We are grateful that they came just to hang with us and give us some input into our planning. It was good to have some fresh ideas from outside our team, especially given Vinny’s experience in Riverview.

And then it was time for dinner. Lukey and Delany spent the arvo making handmade ban mian and stock. A delicious way to start the night.

And since no one was around for Dave’s birthday on 31 December (which means he is actually one year younger than he looks!), we celebrated with cake. Dave was of course completely oblivious to the fact that we were celebrating his birthday, since it was nearly a month ago, so he happily sang the birthday song with us until it was increasingly apparent that the cake was heading in his direction. We also celebrated the fact that Delany had just gotten her permanent residency with a bottle of champagne. 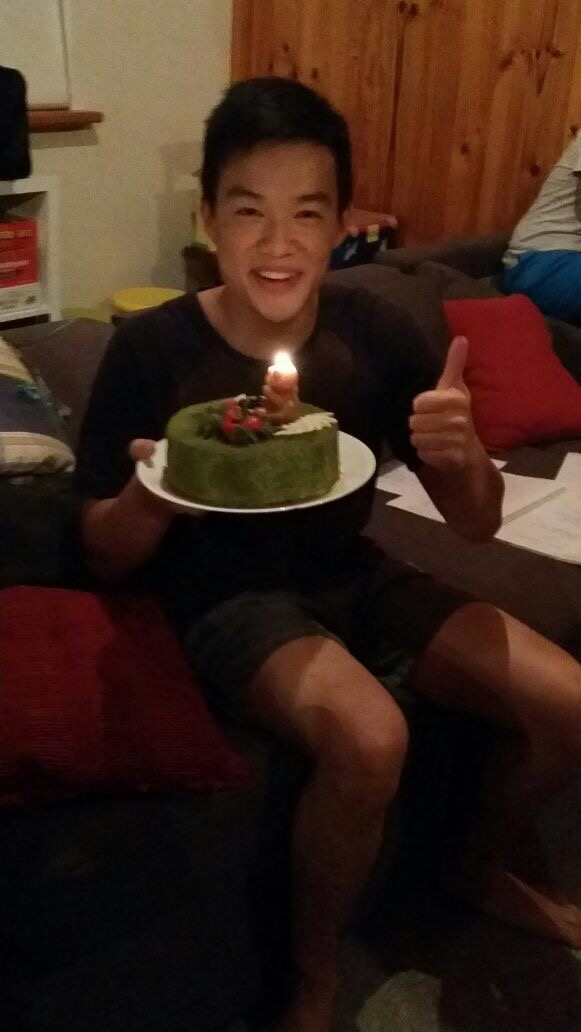 Dave’s birthday wish was to force us all to play Xbox Kinect. We obliged.

The next morning (Sunday), we had a little church service with Joe Wee leading us in worship. And then some more strategising.

Then some of the guys were off to the beach for a dip and me and Ling were off to get an assortment of pies from Miami Bakehouse for lunch. After lunch, we watched a DVD. Ling and I ducked off quickly to get some more groceries. When we came back, everyone else had nicked off to the beach with Lucy, leaving Dave asleep on the floor all by himself. Because we never abandon our leaders. 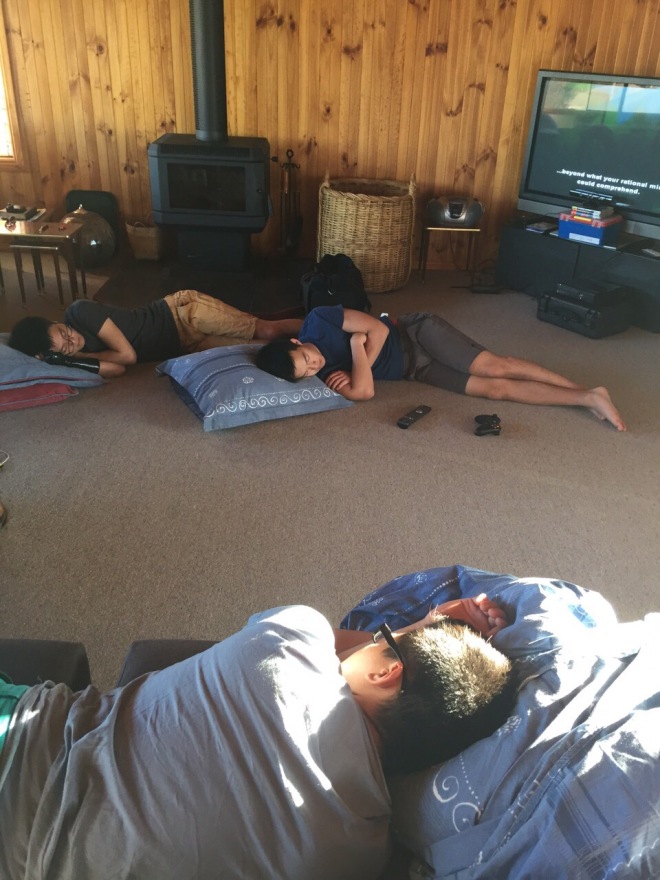 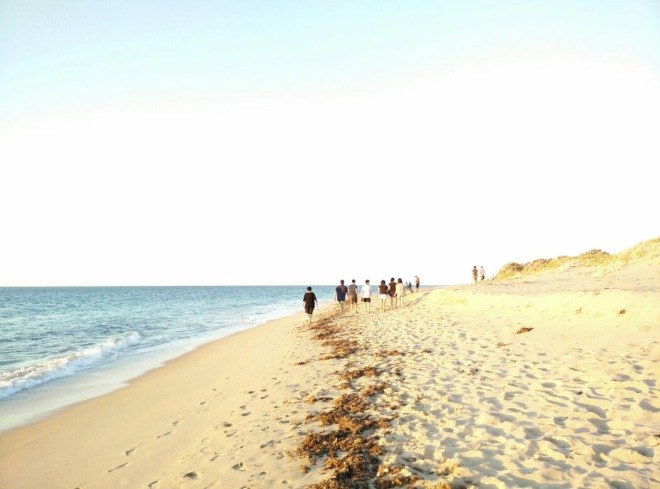 After a stroll on the beach, it was time for a BBQ, with the centrepiece being Dave’s stingray and Lydia’s sambal paste. 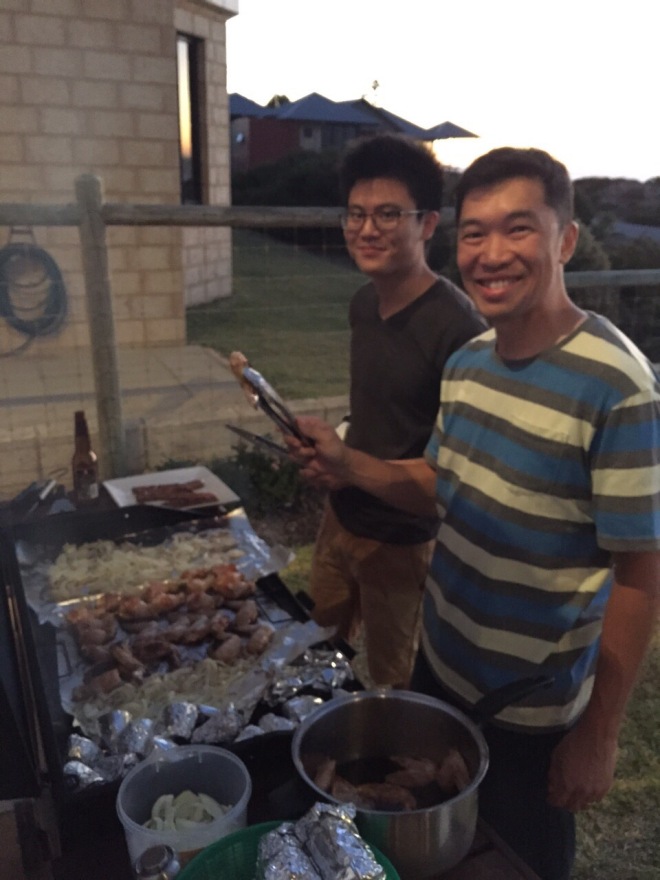 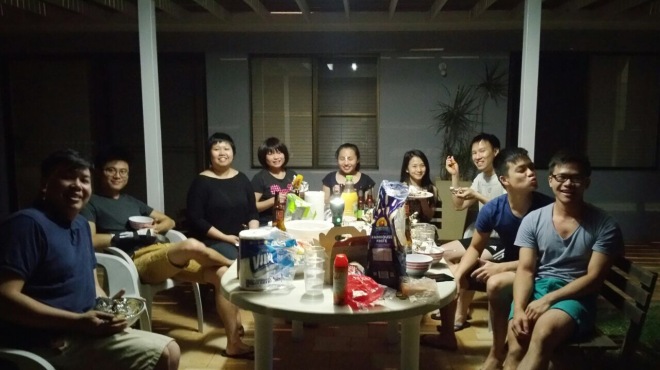 Not content with the haul of crabs from the previous night, Dave and Caleb were determined for another round of crabbing. Whilst we were all tired, somehow through pure leadership influence, they managed to convince Addie, Sharon, Pam, Lukey and Delany to go along.

Monday morning came around way too quickly. After doing some packing and cleaning, we watched our last DVD with a foreboding sense that our awesome weekend away was coming to an end. But not before a round of fish and chips at Ciccerellos and more Simmos ice-cream.

How good and pleasant it is when brothers live together in unity!

It is like precious oil poured on the head,

Running down on the beard,

Running down on Aaron’s beard,

Down upon the collar of his robes.

It is as if the dew of Hermon were falling on Mount Zion.

For there the Lord bestows his blessing

For me, more than the planning and strategising, the weekend away was about our team spending time together and enjoying each other’s company. It was apparent to me that we were truly “for each other”, championing our cause together and experiencing an unprecedented sense of unity.

In teamwork, unity is sacrosanct.

In this Psalm, David says that unity is like anointing oil that flows from the top down. Oil lubricates and reduces friction and makes things work. I believe that this year, the things that we have planned to do and the goals we’ve set will be achieved with ease because of the Holy Spirit’s anointing – an anointing that flows freely because of unity. Things which might take us three years will be able to be achieved in two years. Things which might take 12 months will only take 6 months!

David also likens unity to the dew of Hermon falling on Mount Zion. Hermon is the highest point in the north of Israel, the source of the Jordan river. Because its peak is often in the clouds, it is a rich and lush mountain. Zion on the other hand is arid. So the picture here is one of fruitfulness. Where there is unity, even the most arid of environments will become fruitful.

So, as leaders, clever and strategic programming is one thing. But beyond this, we must fight to protect unity. We need to guard each other’s back. We need to watch the things we say to each other, even if said in innocence. Because where there is unity, the Lord will command the blessing! 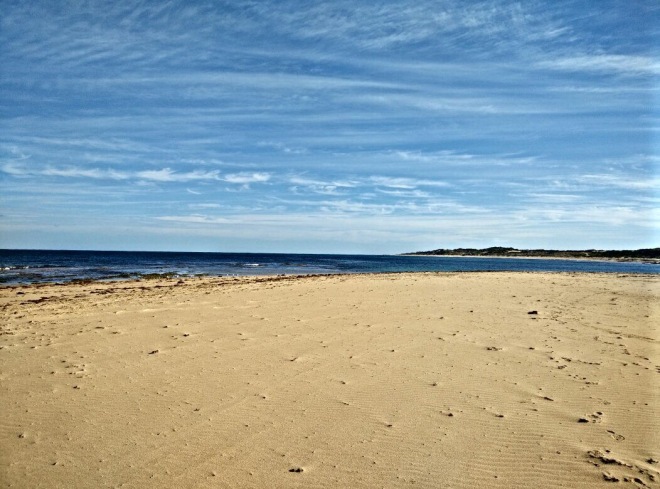