I am writing this post from Singapore, where I am currently on holidays.

Singapore holds a special place in my heart. It was the place where I experienced two spiritual milestones that shaped in me a heart for revival.

I went on my first short term mission trip to Singapore in 1996. You might say: “Singapore is hardly a place to go for a missions trip.” But I can’t quite picture myself yet carrying a shovel with me to the toilet so I was very happy to volunteer for an urban mission. After all, there are still many unreached peoples in many large cities around the world. (My next mission trip was to Hong Kong, my third to Sapporo, so I still haven’t gone “third world” yet).

A church in Singapore, Yishun Methodist Mission (YMM), was prototyping a city-taking strategy based on principles taught by the likes of Ed Silvoso. At the time, the spiritual warfare movement pioneered by C Peter Wagner, Cindy Jacobs and others was beginning to gain a great deal of traction in wider charismatic circles, and the pastor of YMM was about to put some of those principles into action. About 16 of us from Perth joined the members of YMM in implementing the strategy, which was primarily based around the thought of “showing the community God’s love in a practical way, with no strings attached”.

We blessed the local community surrounding YMM with free Christmas gift-wrapping services; free washes and vacuuming for local taxis; cleaning a coffee shop (which on reflection is probably quite close to a third world experience!) and running a free community carnival.

Even though I had gone on this trip to help out with whatever was needed, I got connected to an anointed worship leader from the church and one afternoon, as everyone was letterdropping some leaflets advertising the free carnival, the worship leader asked me to stay back and prepare to lead a session of worship and intercession. I was quite nervous about doing the whole thing (I had just started leading worship in our church’s main service) but we just began worshipping together and picking some songs. Little did I know that this would birth a new ministry of intercessory (or apostolic) worship in me.

When everyone came back from the afternoon of letter dropping, we started worshipping and people began to “get into it” but I thought nothing more of it than that. Then one of the pastors on our team pointed to one of the girls and said “I believe you have a word from God”. We found out later that actually she didn’t have a word, but I think the pastor picked her because she was bowed on the floor and probably looked incredibly spiritual at that moment. She said later that she just took a step of faith and started speaking. Suddenly, God poured out his compassion on her, and through tears, she released a word about God’s heart for the lost in the community.

As most of us would have experienced, crying is seldom a solitary pursuit; when one person starts, the floodgates open. So before long, many of us were catching this compassion and praying through our tears.

Ater that experience, I started reading more about the concept of city-taking and I was being challenged about whether our cities could in fact be taken for Christ.

The second milestone was in 1998 when a delegation from our church went to the International Cell Church Conference hosted by Faith Community Baptist Church in Singapore.

We were incredibly blessed listening to Ed Silvoso as he shared how God transformed cities in Argentina after the church started implementing city taking principles starting with the legendary Plan Resistencia prototype.

Silvoso shared about new paradigm shifts that were elemental to city transformation, including that there is only one church in the city, consisting
of many congregations. I still consider this to be one of the keys to a city experiencing revival.

Then in the night rallies we had the privilege of listening to Argentinian revivalist Claudio Freidzon, who emphasized the need for a hunger for the Holy Spirit. At around that time, I was reading Tommy Tenney’s The God Chasers which started to spark a spiritual hunger
in me. It was amazing that, as a stadium full of people started crying out for God, the Holy Spirit moved and entire sections of people fell backwards under the power of the Spirit.

Today, I can’t say that I’m necessarily hungry for God. Sometimes it’s hard to be in a Western society where hunger for comfort comes first. I think that is something in which we all need to experience a personal breakthrough.

Recently I spoke to a pastor from Singapore who shared about how since those days, God has united his church in Singapore under the Love Singapore movement. Once when they had a church wide prayer-walk in the city, the numbers of Christians who came out of the woodwork were so startling that it got the government worried. That is the sort of revolutionary influence which the church should exert.

On Christmas day this year, we went to a combined Christmas service at New Creation Church. It was held at the Singapore Indoor Stadium and here is a picture of us queueing at 9 am to get in for a 10 am start. Hundreds had already joined the crowd. 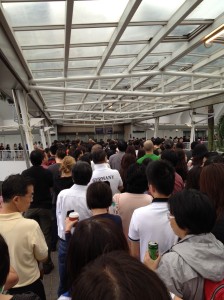 It may be Singaporean “FOMO” (i.e. “fear of missing out”, or in the local vernacular, “kiasu”) but I believe that Singaporean Christians exhibit a passionate faith seldom found in the church in Perth (or most first world communities for that matter). Just seeing the numbers gathered in one place was mind-blowing but this was only one of three or four megachurches. Practically every suburb in Singapore has a life giving church making an influence in their community.

This year, my involvement with the Commonwealth Prayer Initiative in Perth (with almost two hundred churches participating thanks to the efforts of Wendy Yapp and her team) has awakened in me the possibility of seeing revival in Perth in my generation. God is already engineering one of the preconditions: the unity of the church in the city.